Metadata and data documentation are the contextual information about the data and its provenance, necessary for interpreting it. Providing comprehensive metadata and documenting the data lifecycle according to your discipline's conventions makes your data understandable, discoverable, and reusable.

Metadata, data about data, can have multiple meanings and the documents described above that explain how data should be interpreted can also be called metadata. However, in these pages we use the term metadata referring to discovery metadata, the 'label' of your data, which is needed when data is published and shared.

Data documentation means creating information, which enables the interpretations of the data correctly and independently. It consists of files that explain how data were created or digitized, how the data should be interpreted, its structure, and how the data has been modified. This information can also be called data-level documentation or even metadata as it is information about data. Documenting data should be considered as best practice when managing data and it is also essential for data preservation. Whenever data are used sufficient contextual information is required to interpret the data correctly and independently.

Metadata is information regarding the data, for example, where, when, why, and how the data were collected, processed and interpreted. Metadata may also contain details about experiments, analytical methods, and research context. 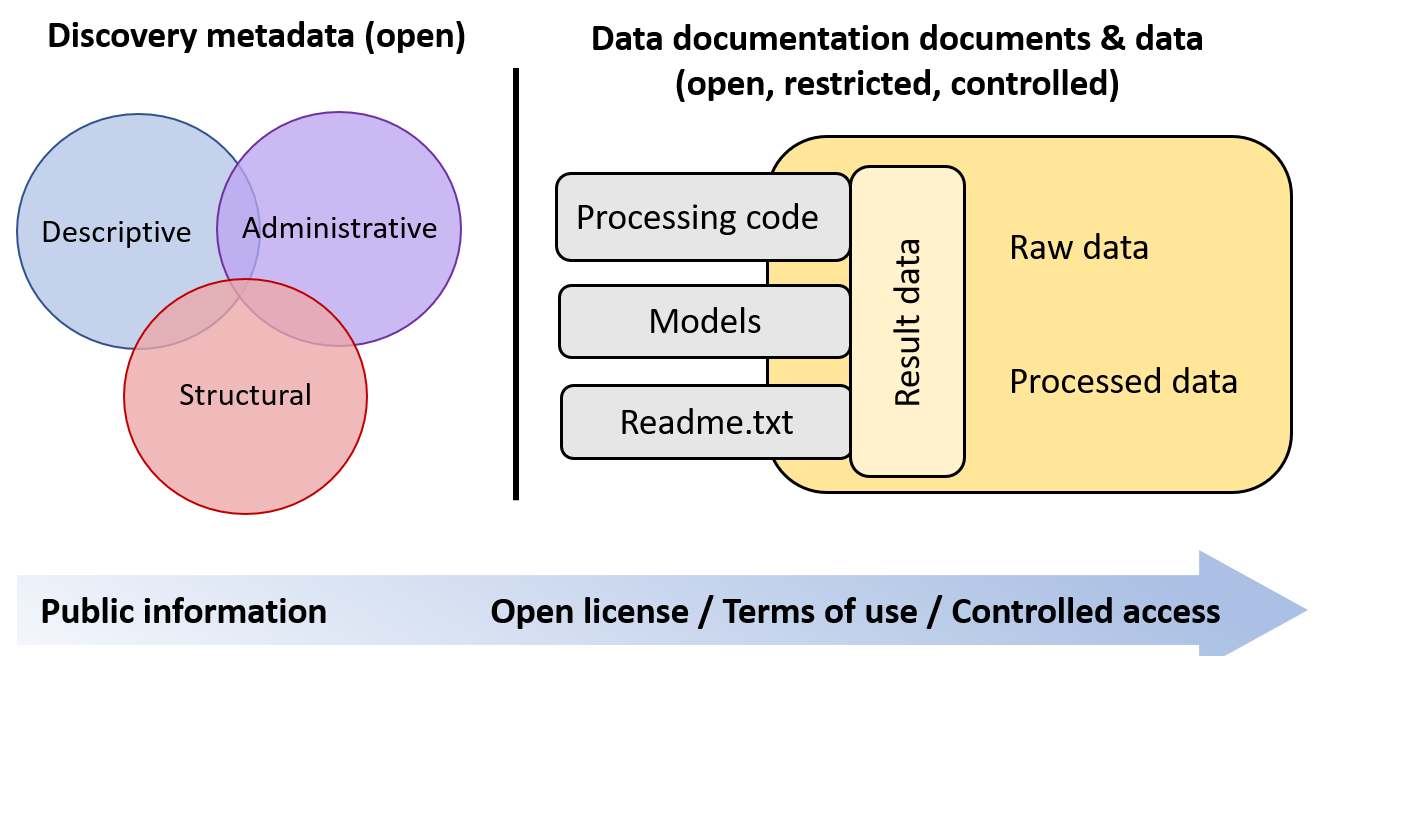 Discovery metadata can be of three types: Descriptive, Administrative and Structural.

Descriptive metadata of a dataset can be divided into two subcategories:

1) core metadata or study level metadata (for discovery and identification - for search and citation), which includes:

Administrative metadata includes information about the rights of the dataset. This means information about license, type of restriction and reason for it (ethical, legal etc.), embargo time, owner of the rights, contact for reuse as well as how to apply for use permit and access.

Structural metadata describes how the dataset is organized internally and how it relates to other datasets (managing versions etc.). In some disciplines, data are published and shared with community endorsed standards and schemas, which are a formal and machine actionable way of expressing the structural metadata. Schemas are used to express the scientific domain, structure, relationships, field labels, and parameter-level standards for the dataset as a whole. A schema enables data to be shared, merged or transferred between information systems without losing the meaning or structure of the data (i.e. data are interoperable). In addition to implementing technical standards and schemas, securing semantic interoperability between different data requires using and referring to published semantic artefacts.

You can use Qvain - Research Dataset Metadata Tool, to create core, administrative and structural metadata for your dataset.

It will be published in Etsin - Research Data Finder.

If you have additional metadata that does not fit in the data catalogue, additional metadata and documentation like code books or configuration files can be added to the dataset as separate files. This metadata can also be innate within the data files. Remember that this can make the data harder to find. If you add extra metadata:

Also, think about your file naming conventions, directory structure and version control. More about that in Data organization.

Data documentation can be done by using:

and they all take part in explaining what the project data is and what it means.

Controlled vocabularies, thesauri, and ontologies are all so called semantic artefacts, which are machine-readable models of knowledge. When a data standard and schema express the data structure (the relations of different elements in the data), semantic artefacts make the meaning of the content unambiguous and 'understandable' to a machine (machine actionable). For example, when you collect data about plants it may be obvious to other human readers, that the data is about living organisms and not about power plants and other factories, but a computer can't distinguish the difference by interpreting the meaning from the context as humans can. For this purpose, data should be accompanied by or refer to a publicly available vocabulary that tells a machine how to interpret the data in the context, and what values in the variables mean (for example are the numbers in the "Degrees" column Fahrenheit or Celsius degrees). It is also important to let the machine know whether an empty field, NULL, or zero means zero value, or if the data is simply missing. It can be crucial to the analyses and results if data is (mis)interpreted in different ways when reusing or merging datasets.

It is good practice to make a clear file naming system from the start of your project and for example use the same system together with your research team. This helps you as well as your colleagues to understand what files contain from the name. Read tips for organizing your data and naming files and folders below or from RDMKit Data Organisation page.

Your research field might also have instructions and guidelines for organizing data. Brain Imaging Data Structure (BIDS), for example, has been created by the scientific community of brain researchers, and it defines the file formats, file naming rules and rules to organize the data in directories.

To keep data well-organized you should have a version control system in use. This can either be done manually, where you incorporate a running number to the end of a file name (_v03), or automatically, which is the preferred way. Automatic version control can be done with software such as Git, GitHub or GitLab (your institution might offer an integrated solution) or use cloud storing solutions, which usually provide automatic file versioning. More tips on data organization can be found in the ELIXIR Research Data Management Kit (RDMkit).

When making new versions of data files, it is important to keep a copy of the original raw data. Data should be kept in its raw form whenever possible to enable transparency and facilitate reanalysis. It also assists in combining multiple data sources and re-purposing the data use. Also, when sharing the data it might be worthwhile to provide both unprocessed and processed versions of your data, with either code or explanations for deriving the latter. In some cases it is even possible to publish the data with the processing and analyses code as an executable paper in order to prove that the scientific process is reproducible. In other words, executable papers are dynamic pieces of software that combine text, raw data, and the code used for the analysis, and that a reader can interact with.

All digital information is structured data. A file format is a standard way that information is encoded for storage in a computer file. An open format is a file format for storing digital data, defined by a published specification usually maintained by a standardization organization, that can be used and implemented by anyone. In contrast to open formats, closed formats are considered trade secrets. For example, a good deal of commercial equipment or software produce data that can not be read or interpreted without other tools from the same provider. When organizing, storing and publishing research data it is important to create coherent, intelligible and transparent entities that are easy to access and reuse. This is possible with open formats that can be opened and used also with commonly used open tools.

Files and folders: structuring and naming

It is important to take some time to plan file and folder structures and naming.