This article discusses the best practices for developers to follow while creating or deploying their application in Pouta. Pouta clouds, like other IaaS clouds, offer tons of flexibility compared to traditional computing environments but are also susceptible to failures that any large computing environment may face.

Best practices to build your application on Pouta are all about leveraging the flexibilities of IaaS cloud computing, code management, automation, orchestration, wise data management and dealing with underlying cloud environment failures. Some of these practices which could be easily followed by developers considering to build and deploy their application in Pouta cloud environments are illustrated in the figure below. 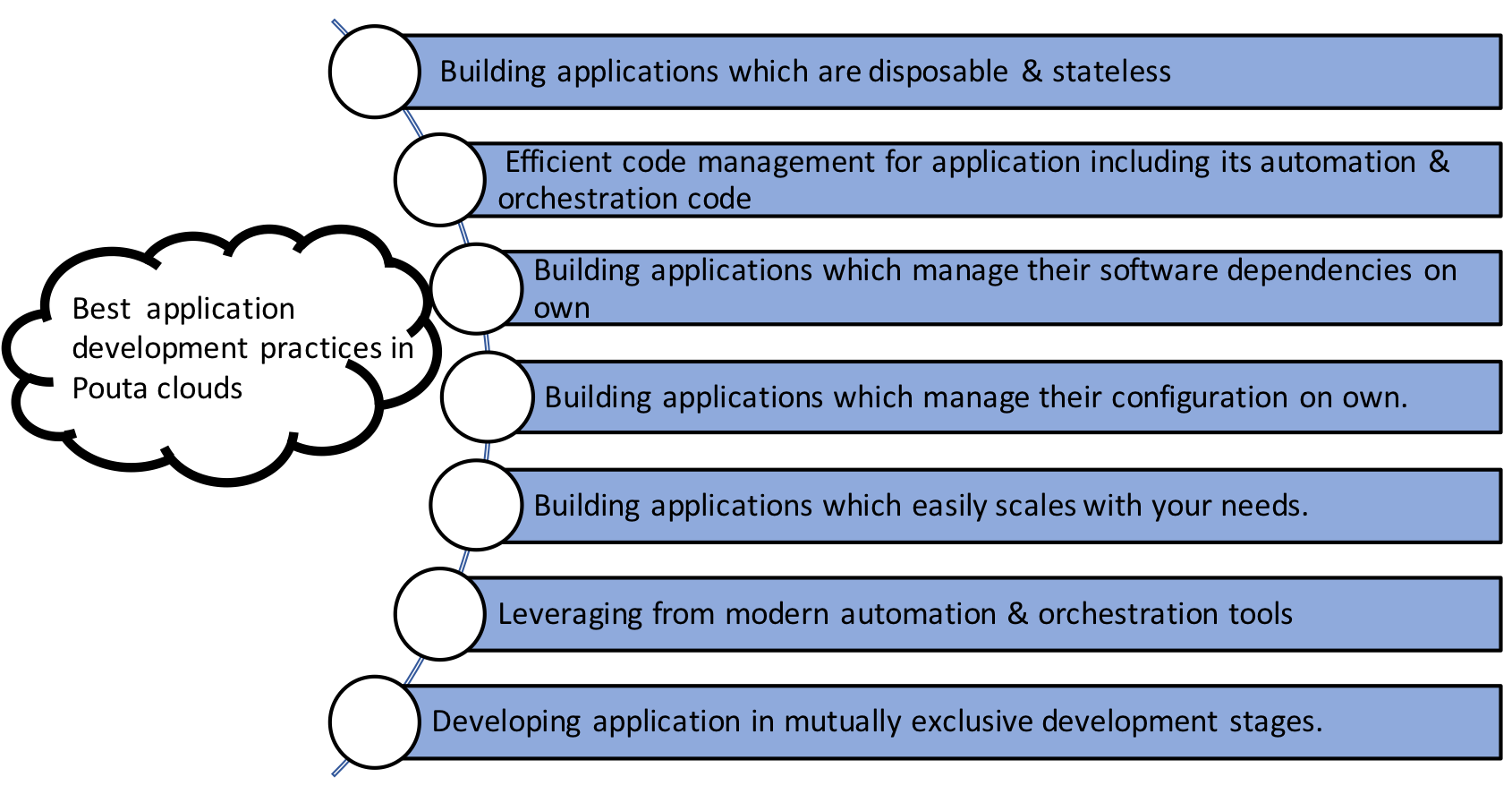 The above practices are only a small set. You can additionally follow a larger set of practices as mentioned by the Cloud Native Computing Foundation, various online literature on OpenStack such as its technical blogs, user guides, user stories etc. In real scenarios, some of these practices may not be applicable to your application, but applying practices that are applicable to your application development is the key takeaway of this section. Now, let us discuss in detail the practices illustrated above with code examples wherever applicable.

If possible, try to develop your application in the form of distributed stateless processes/modules that are responsible for computation. Important data that needs to persist should be stored in separate backing services that are persistent in nature. In Pouta clouds, we have a backing service in the form of our Object and volume storage. Running stateless processes on your VMs for computation and storing important data in the persistent storage can help you to minimize the impact in case your VMs are accidentally terminated or enter an inaccessible state. This also gives you the flexibility for scaling up and down your services at any time as processes do not have a state to convey before scaling, which maximizes the robustness of your application and provides an option for graceful disposability of your application. The disposability of your application should be complemented by a fast bootstrap, which brings added agility to your application development and small startup cycles in case of application failures.

The application you develop should be tracked by version control software of your choice, such as GIT, SVN, DCVS, Mercurial etc. This helps you to make a code base which is backed up and can be used for multiple staging/testing version deployments in your production or test environments. We at CSC use GIT for our code management. You can, for example, have a look at one of our public code repositories to see how we manage our code base. You should preferably also have automation and orchestration code for your application in the same code repository. For example, one of our code repositories that deploys an Etherpad application on Pouta has all of its automation, orchestration and application code in the same code repository.

Another flexibility modern code repositories provide is code sharing and reuse. For example, you could fork one publicly available code repository in GitHub and try to reuse some parts of the code that suits your application. If you encounter any issues or happen to enhance the base code, you could even contribute back to the community by reporting an issue or generating a pull request to make your changes available for everybody. This approach can prevent you from reinventing the wheel, shorten your development cycle and allow you to concentrate on the actual service features of your application.

Try to build an application which can be readily scaled up or down based on your requirements. You could go for vertical scaling with the easy-to-use VM resize option in Pouta. In this case, you could resize your VM with a flavor suitable for your load i.e. flavor with more or less compute resources (CPUs, RAM, disk etc.). Vertical scaling works fine within the same family of flavors in Pouta. If vertical scaling is not suitable for your load, you may consider a more complex scaling option: horizontal scaling. In horizontal scaling, you design an application capable of running on any number of worker VMs which could be scaled as per your requirements. If you consider going for horizontal scaling, you should also self-deploy a load balancer which could distribute the load across your worker VMs. In Pouta clouds, you could also programmatically scale your Heat stack using OpenStack Heat resources like OS::Heat::ResourceGroup, OS::Heat::AutoScalingGroup and OS::Heat::ScalingPolicy.

There are many automation & orchestration tools which could be used to automate your application deployment inside Pouta clouds. Heat & Ansible are two such tools which are stable, widely used and are supported by Pouta clouds. With Heat, you could specify complex application deployment using text files known as templates. Ansible is the IT automation tool which can ease up the deployment of your application in Pouta by taking care of configuration and dependency management, software provisioning etc.. Ansible also uses simple text files known as playbooks for deployment and orchestration of applications. Ansible's OpenStack cloud module can also be used for orchestrating virtual resources and application deployments inside Pouta. Both Heat & Ansible can be used in conjunction with each other for example as used to deploy above Etherpad code example in Pouta, or in a standalone setting for example as Ansible playbooks used for deploying Spark cluster in Pouta.

If you think these modern tools are difficult and not your cup of tea, please have a look at following Heat task snippet from etherpad-deployment-demo/files/etherpad-heat-stack.yml which programmatically deploys a VM, attaches it to a security group and a virtual network.

As a better software application development practice, you should follow three stages in your development cycle: Build, Release & Run. These stages should have strict separation between themselves. You could even apply for different Pouta projects for these stages in case you want exclusive separations between them. In Build stage you make a distribution of your code, it could be anything for ex. a GitHub tag, Python EGG, DEB or whatever is suitable for your application. Release stage involves making your new application version available to its users. Every release should have a unique ID associated with it for example incrementing version numbers (v0.1, v0.2..) or Timestamps (2018-04-17-10:32:17). You could also rely on Continuous Integration (CI) practice at this stage. Under CI practices, each change committed to your codebase is automatically tested, before it could be merged with the codebase. There are some well known CI services online such as Travis CI, Circle CI and many more, you could choose one suitable for you. You could also follow Continuous Delivery (CD) practices in the release stage, which ensures availability of working version of your code at any time. In Run stage, you deploy your latest release on the deployment environment and have fun with newly reported issues, feature request, user reports etc. You could sneak into our public
[code repositorie] and see our practices for GitHub tags, versioning and reported issues.

Finally, let's briefly summarise our Etherpad code example and see how these practices are implemented in it.

etherpad-deployment-demo/playbooks/build-heat-stack.yml playbook has tasks for building up Heat stack (VMs for Etherpad & Galera cluster, Security groups, Assigning public IPs, attaching VMs to project's virtual network etc.) depending upon parameters supplied the by developer in etherpad-deployment-demo/playbooks/my-heat-params.yml. This playbook uses dynamic inventory and generates dynamic inventory file (etherpad_inventory) for the deployed stack. Execution of playbook completes when Etherpad frontend VM & Galera cluster VMs are set up in Pouta and are accessible via SSH.

etherpad-deployment-demo/playbooks/configure-etherpad.yml playbook has tasks for creating and configuring front-end HA proxy, installing dependencies for Etherpad on VM, creating a database for Etherpad application, configuring and launching the Etherpad node.

We recommend that you try out this Etherpad example or something similar in Pouta cloud environments. These examples will assist you in understanding these practices better and how to apply them in your own application development.