CSC supercomputers use Lustre as the parallel distributed file system. This article provides a brief technical description of Lustre.

The Lustre file system consists of a set of I/O servers called Object Storage Servers (OSSs) and disks called Object Storage Targets (OSTs) which store the actual data. The metadata of a file are controlled by Metadata Servers (MDSs) and stored on Metadata Targets (MDTs). Basically, the servers handle the requests for accessing the file contents and metadata; the applications do not access disks directly. Lustre systems use typically multiple OSSs/MDSs together with multiple OSTs/MDTs to provide parallel I/O capabilities. 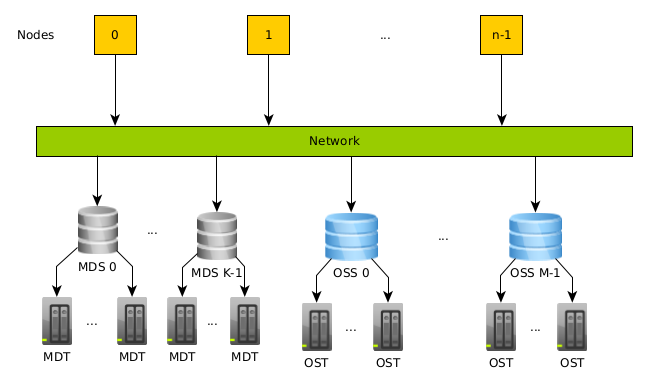 Lustre is designed for efficient parallel I/O for large files. However, when dealing with small files and intensive metadata operations, the MDS/MDT can become a bottleneck. For example, when a user opens/closes a file many times in a loop, the workload on MDT increases. When several users do similar operations, the metadata operations can slow down the whole system and influence many users. As login and compute nodes share the file system, this can show up even as slow editing of files in a login node. Also, if in a parallel application the different processes perform a lot of operations on the same small files, metadata operations can slow down. Innocent looking Linux commands can also increase metadata workload: for example ls -l prints out file metadata, and giving the command in a directory with lots of files causes many requests to MDS.

In order to gain from parallel I/O with Lustre, the data should be distributed across many OSTs. The distribution across many OSTs is called file striping. Logically, a file is a linear sequence of bytes. In file striping, the file is split in chunks of bytes that are located on different OSTs, so that the read/write operations can be performed concurrently.

Striping can increase the bandwidth available for accessing files, however, there is also an overhead due to increase in network operations and possible server contention. Thus, striping is normally beneficial only for large files.

As the supercomputers have many more nodes than OSSs/OSTs, the I/O performance can vary a lot depending on the I/O workload of the whole supercomputer.

In a parallel program, performance is improved when each parallel process accesses a different stripe of a file during parallel I/O. Moreover, in order to avoid network contention each process should access as few OSTs/OSSs as possible. This can be achieved through stripe alignment. Best performance is obtained when the data is distributed uniformly to OSTs, and the parallel processes access the file at offsets that correspond to stripe boundaries.

If in the above example, we had a file of 5 MB, then the OST 0 would have an extra 1 MB of data. If the data would be distributed evenly between four processes, each process would have 1.5 MB and the access would not be stripe aligned: first process needs to access OST 0 and 1, next process OST 1 and 2, etc. processes are not aligned. This could now cause network contention issues.

The default stripe size in CSC's Lustre is 1 MB and stripe count is 1, i.e. by default the files are not striped. Stripe settings can be, however, changed by user which can at best improve the I/O performance a lot.

which prints out: The output shows that the file is distributed over two OSTs (stripe count 2), output also shows that the particular OSTs are 11 and 20.

For a directory, the output shows the settings that will be used for any files to be created in the directory.

Stripe configuration can be set with the lfs setstripe command. In most cases, it is enough to set the stripe count with the -c option, however, also other options can be set, see e.g. man lfs-setstripe or Lustre wiki.

!!!! Note If the file is already created with a specific stripe, you can not change it. Also, if you move a file, its stripe settings will not change. In order to change striping, file needs to be copied:

Differences between Puhti and Mahti

Puhti and Mahti have similar storage areas home, project and scratch, however, their the Lustre configuration is not the same.

One main difference is that for Mahti there are separate MDTs between scratch, home, and project, thus the metadata performance does not interfere from the different file systems. Moreover, the scratch on Mahti can have better performance than the other storage areas if your application and the data size is big enough because of more OSTs and MDTs. On Puhti, all the OSTs and MDTs are shared across the storage areas, thus the performance should be similar between them.

The peak I/O performance for Mahti is around to 100 GB/sec for write and 115 GB/sec for read. However, this performance was achieved on dedicated system with 64 compute nodes, which means around to 1.5 GB/sec per compute node. If more nodes are used or many jobs do significant I/O, then you will not achieve 1.5 GB/sec, including also that maybe the I/O pattern of an application is not efficient. The corresponding performance for Puhti is half of that of Mahti.