Both CPU and GPU nodes have two AMD Rome 7H12 CPUs with 64 cores each, making the total core count about 180 000. The CPUs are based on AMD Zen 2 architecture, supporting the AVX2 vector instruction set, and run at 2.6 GHz base frequency (max boost up to 3.3 GHz). The CPUs support simultaneous multithreading (SMT) where each core can run two hardware threads. When SMT is enabled, the total thread count per node is 256 threads.

The CPU nodes are equipped with 256 GB of memory, and no local disks.

The GPU nodes are equipped with 512 GB of memory and a local 3,8 TB Nvme drive. They also have four Nvidia Ampere A100 GPUs.

Mahti node has a highly hierarchical structure. There are two sockets in the node, each containing a single CPU and memory DIMMs. All the memory within the node is shared, but memory performance depends on the distance of the core to the memory. In order to provide slightly increased memory performance we run each CPU in NPS4 (NUMA per socket 4) mode that further splits each CPU into 4 NUMA domains. Each NUMA domain has 16 cores, and two memory controllers with 32 GiB of memory in total. Core 0 runs threads 0 and 128, core 1 threads 1 and 129 and so on. The figure below shows how the threads are distributed over each of the cores and NUMA nodes. 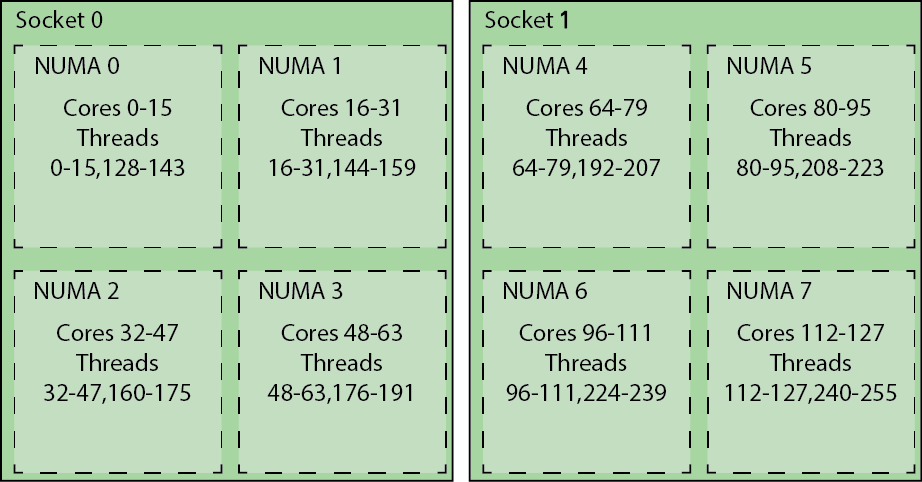 The basic building block of the processor is a core, which are then grouped into core complexes (CCXs), and furthermore into compute dies (CCDs).

Moving up from the core, 4 cores are grouped together into a core complex (CCX), within the CCX the cores share the same 16 MiB of L3 cache. Two of these CCX parts are then combined to form a compute die (CCD). 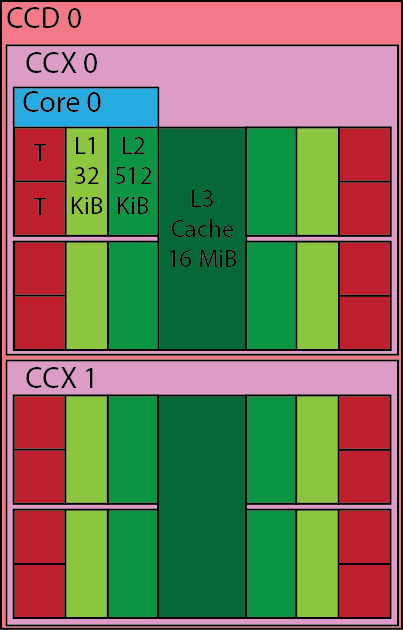 Each processor consists of 8 compute dies and an additional I/O die that houses the memory controllers and PCI-e controller. Each node is then made up of two of these processors and one 200gbit HDR network adapter.

The interconnect is based on Mellanox HDR InfiniBand and each node is connected to the network with a single 200 Gbps HDR link. The network topology is a dragonfly+ topology. The topology consists of multiple groups of nodes, each of which is internally connected with a fat tree topology, these fat trees are then connected to each other using all to all links. 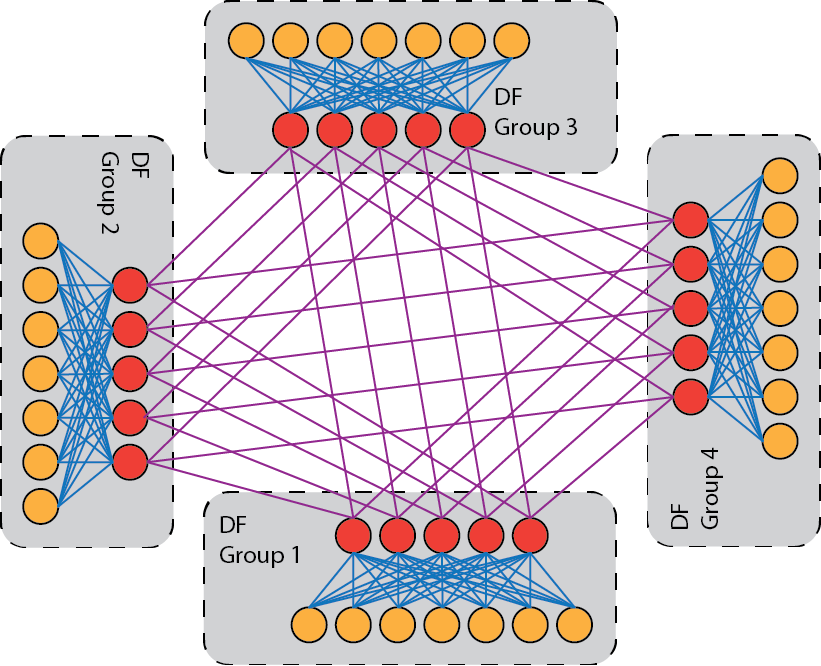 Current Lustre configuration for Mahti is:

The scratch on Mahti can have better performance than the other storage areas, if your application and the data size is big enough, because of more OSTs and MDTs.

The peak I/O performance for Mahti is around to 100 GB/sec for write and 115 GB/sec for read. However, this performance was achieved on dedicated system with 64 compute nodes, which means around to 1.5 GB/sec per compute node. If more nodes are used or many jobs do significant I/O, then one does not achieve 1.5 GB/sec. This is also the case if the I/O pattern of the application is not efficient.