This article describes how to use Snapshots to capture and store the file system state of a Pouta virtual machine.

There are two types of snapshots used in OpenStack: image (instance) snapshots and volume snapshots. Both snapshot types can be utilized when creating a new instance. Image snapshots are more common. 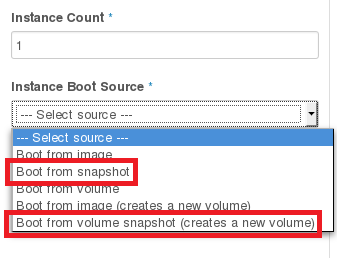 Image snapshots hold the state of a given instance's root disk, and can typically be used as bootable images. Please note that if the instance has an ephemeral disk, the contents of the ephemeral disk are not captured in the snapshot.

Image snapshots are managed in Compute | Images in the web UI. For instructions on creating image snapshots, please see the section Creating an image based on an existing image in the [next chapter].

Volume snapshots capture the state of a persistent volume. They can be used e.g. for a one-time backup before an upgrade operation that touches the volume contents. Volume snapshots are managed in Compute | Volumes in the web UI.

There is presently one [known issue] related to snapshots, to be fixed in a future IaaS upgrade.

We recommend powering off the instance before taking a snapshot of it. This is the best way to make sure the file system is captured in a consistent state.

Please note that snapshots may not always be the optimal method of getting an instance into a predefined state. For longer term cloud usage, configuration automation tools should be considered. These mostly replace snapshots by starting from scratch and then automatically setting up the relevant software and configurations. Ansible and Puppet are such tools. Using these tools, you can use the automatization benefits of the cloud more efficiently and benefit from the latest security updates upon instance creation (as long as CSC-built images are used).

Note to CSC: add links above to the configuration automation tools.