You can access this feature in the web user interface's left hand panel or using the OpenStack or Heat command line client. Orchestration provides an easy way to create the entire infrastructure based on a reusable and human-readable template file. The template can describe many components of the infrastructure, such as servers, volumes and floating IPs. In the same file, it can attach the volumes and IPs to specific instances. A template can also define multiple instances connected to specific networks, some of which have floating IPs and some a volume attached. The file can also be used to modify the existing infrastructure.

Orchestration via the web user interface

These instructions provide a simple example on how to set up a stack via the web user interface. To create a Heat stack, click the "Stacks" link in the Orchestration menu. The opened view displays all existing stacks and provides the button "Launch Stack" to launch a new stack. In the window which was opened after clicking the "Launch Stack" button, you can start configuring your stack. Selecting a template is mandatory, and the template data can also be provided as direct input, as depicted in the picture below. Note that this picture contains a valid, yet simple example of a template which builds two instances and displays the IP address of the first instance. 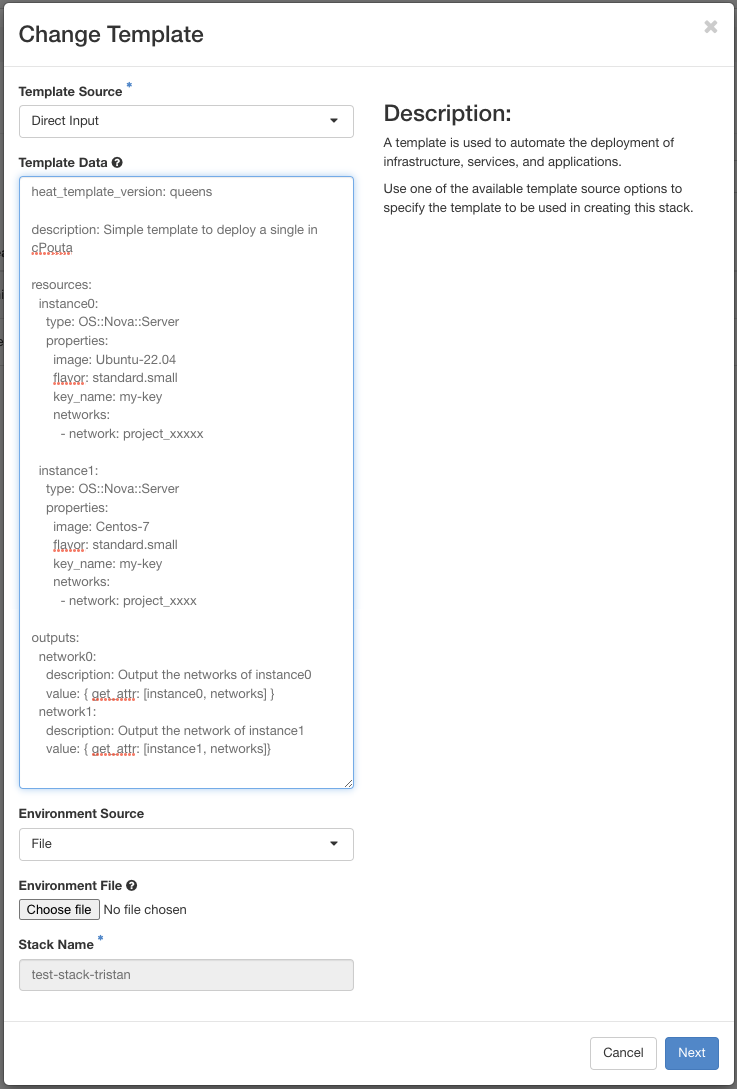 After choosing "Next", the web user interface asks for a stack name and your password. After this, you can launch the stack. When the stack is built, it can be managed from the orchestration's Stacks view. The items which were built as a part of the stack can be found in their corresponding menus. In this case, the two instances can be seen and managed in the instances menu. In the stack's Overview tab (Orchestration -> Stacks -> click the stack), you can also see the output defined by the "outputs" section in the picture's example. To delete all components created by the stack template, simply press "Delete Stack" on the Stacks page.

Show the details of the newly created stack among other existing stacks:

To try out the example provided here, modify at least the "key_name" in the template code: