Editing text files by typing in Linux systems can be done with so called text editor programs. Editors are normally used to modify or create relatively small files like programs, parameter files or small input files. Systematic modifications to large input or output data files are normally done with other tools.

Several text editors are available in the CSC computing environment. Here we briefly introduce just three of them: nano, emacs and vim. Other frequently used text editors include vi and gedit. In addition to these general purpose text editors, many application programs include their own special editing tools.

Nano is a simple and handy tool for editing small files. It is easy to use and it suits well as the first text editor of a novice Linux user. Nano is a text based editor: it does not include any mouse based functions or command menus. Nano starts with command:

This command opens the given file to the editor or creates a new empty file if the file does not already exist.

When the nano editor has started, you can see the basic commands listed in the bottom of the screen. The listed commands are executed by pressing simultaneously the control key: Ctrl, into which the program refers with ^ sign, and some of the listed keys. For example you can read the exit from the program with Ctrl-x, save the changes with Ctrl-o or read a new file to the editor with Ctrl-r. If you already have some text in nano, Ctrl-r will add the content of the selected file to the end of the previously created text. With Ctrl-v you can browse the text one page forward and with Ctrl-y one page backwards. Ctrl-W command can be used to search certain strings (words) from the text. Ctrl-k cuts one line of text. To cut larger regions, first mark the beginning of the text to be copied with Ctrl-6 then move the cursor to the end of the area and press Ctrl-k. To paste the text that was cut, press Ctrl-u. More commands can be found from the nano help text, that is opened by pressing Ctrl-g. 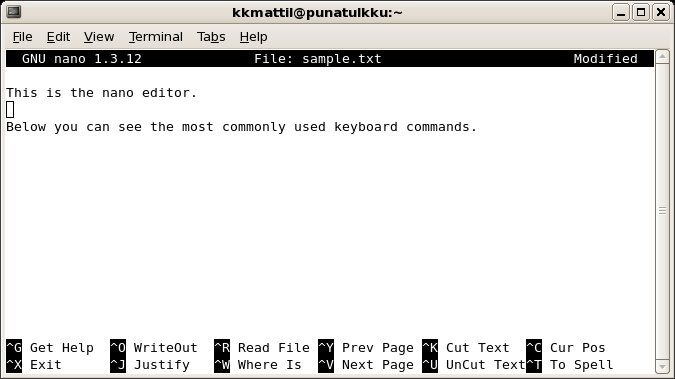 Emacs is a versatile editor that contains large amount of commands, functions and extensions. Emacs can be used in two ways: as character based editor like nano or through a graphical interface. Using the graphical interface requires that you have X-term connection to CSC or are using the Puhti web interface remote desktop. In the character based mode emacs commands are given using Ctrl and Esc keys much like in the case of nano commands. In the graphical interface you can use also mouse based command menus which makes working much more feasible for a new emacs user. To start emacs in CSC environment type:

If using the Puhti web interface remote desktop, you can open the graphical emacs interface from Application > Accessories > Emacs. In the graphical user interface the File menu is used to read in and save files. Edit menu include commands to copy, cut and paste text. This menu also contains tools to search and replace strings. With the commands in the Options menu you can control many properties of emacs. You can for example use Syntax highlighting when you are working with a program or a shell script file. You can have several files opened in one emacs session. The Buffers menu allows you to choose the buffer to be edited. The Tools menu contains miscellaneous commands and tools.

If you don't have remote graphics enabled you need to know the command shortcuts. For example, the shortcut to exit is ctrl-x ctrl-c. 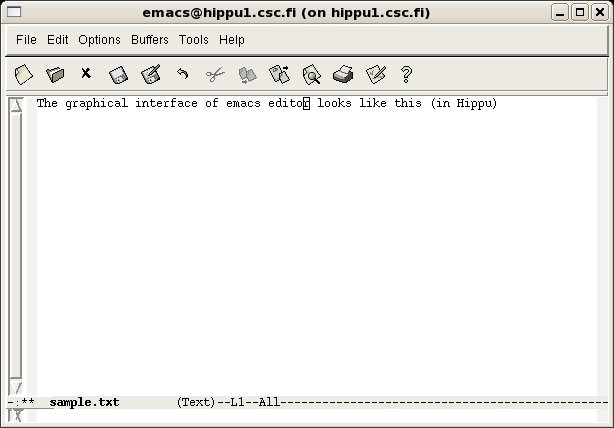 Vim is a highly configurable text editor built to enable efficient text editing. It is an improved version of the vi editor distributed with most UNIX systems. vi is the de facto standard Linux editor. Essentially all Linux systems come with vi (or a variant, like vim) built in.

Vim is often called a "programmer's editor," and so useful for programming. It's however not just for programmers, though. Vim is suitable for all kinds of text editing, from composing email to editing configuration files.

Vim differs from many editors in that it has two main modes of operation: command mode, and insert mode. This is the cause of much of the confusion when a new user is learning it.

To switch to the insert mode one needs to press the i key. When you have finished entering a text, press Esc to return to the command mode.
To save the file enter command :w file_name.

The command to quit vim is :q, which needs to be issued in command mode. 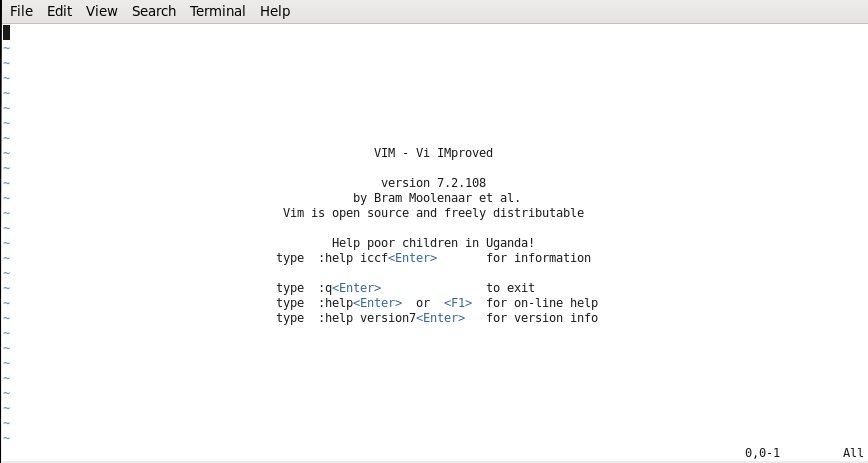 In some cases application programs, executed at CSC, produce image files instead of text files. If you have a working X-term connection you can use eog (Eye of GNOME) and evince programs to view image files. Eog is a simple image viewing program that can display common image formats like png, bmp, jpg and tiff. However eog is not able to show PostScript (ps) or pdf files. For these file types you can use program evince.

To view a jpg file, type:

and to view a PostScript file, type:

Post script files can be converted to pdf documents with command ps2pdf. This command reads a PostScript file and prints out corresponding pdf file. For example command: 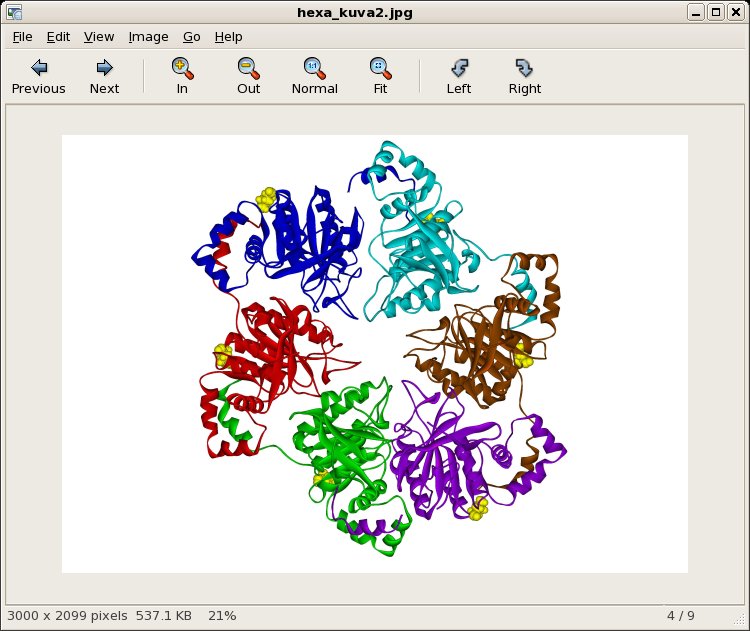 If you're using the Puhti web interface, specifically the mate desktop, the available software corresponding to eog and evince are eom (Eye of MATE) and atril.