This document introduces some terminology and how cloud resources differ from traditional HPC. cPouta is an Infrastructure as a Service (IaaS) cloud. In IaaS cloud environments, users can quickly setup virtual machines with a set amount of resources, attach various types of storage to the machines and connect them using virtual networks. The user does not need to buy hardware, network it and install operating systems, as this has already been handled by the cloud administrators.

Traditional hosted services typically rely on a set of fixed resources. Users get access to physical servers, firewalls, storage and so on, or a virtualized representation of the same. Storage in hosted services is provided by onboard disks, disk arrays or a Storage Area Network (SAN) depending on performance, multi-tenancy or backup requirements. Quite often hosted services utilize proprietary software for specialized tasks such as live migration or live backups, and resiliency is provided by duplicating or clustering each element so the service can do failover to the remaining healthy ones when disaster strikes. Often this simply means physical level redundancy: A new box will claim the responsibility of the old one. This happens in addition to the redundancy on other levels e.g. multiple disks, multiple network links and so on. In other words everything from individual elements of the hosting infrastructure to the hosts that end users are running are considered - if not irreplaceable - at least precious. In terms of scaling the end user application or service, growth in utilization is typically projected for longer periods of time such as months or years, and extensions in capacity are planned based on these projections.

In contrast, applications or services running on top of cloud IaaS are almost designed from the very premise that any or all of the hosts can fail at any time. If this occurs, new hosts are simply built on demand to replace the old ones, drawing from what can be considered a semi-infinite pool of resources. Every possible element of the cloud service is typically virtualized so dependencies to bare-metal components are minimized. The storage backend of a cloud service needs to provide a good amount of I/O per second (IOPS), resiliency against failures, as well as good scalability whenever there is a sudden increase in demand. Traditional storage solutions may not meet these requirements so new types of Open Source Storage solutions are increasingly used for cloud storage, allowing use of commodity hardware and a mix between various hardware vendors. Features such as live migration support are often directly built in to these open solutions.

Cloud services also utilize many forms of Configuration Management (CM). Of course, CM can also be used with traditional hosted services, but operating a cloud service almost mandates that the underlying system configurations are stored and utilized in a consistent manner. This goes for any application or service that the user is operating, too. Once a configuration of any part of the service is written down with a CM tool of choice, that configuration can be replicated to any number of additional nodes or promptly used when rebuilding a faulty one. Furthermore, this decouples the replaceable from the irreplaceable very effectively. Frontend servers, application servers, caches and so on can always be rebuilt utilizing CM, but databases and other elements where state and data are stored can't. So while working in a cloud mindset it certainly becomes easier to recover a system by rebuilding most parts of it, any element holding irreplaceable information should still be backed up to external systems and protected against failure.

In terms of scaling, a good way to operate services in the cloud is to set a baseline capacity (X load balancers, Y web servers, Z database servers...) and increase it based on trending demand. This goes for scaling the system down, too. Whenever cloud resources are not required, the proper thing to do is to destroy them, freeing resources to the pool. In this way scaling a user application or service in the cloud is much different than with traditional hosted services, but it also adds to the benefit of the user since by terminating idle instances they are consuming less Billing Units for idle cycles.

A comparison against the traditional HPC (High-Performance Computing) services that CSC also provides is presented in the following table.

OpenStack is the free open source software that has been used to build the cPouta cloud environment. It offers components for managing virtual machines (Nova), networks (Neutron), identity (Keystone), virtual machine images (Glance) and persistent volume storage (Cinder). There is also a web interface for managing most of the other components (Horizon).

IaaS provides users with virtualised servers, storage and networks through a self-service interface. Users have flexibility to choose many aspects of their environment, but they must also support the operating system, middleware, software and data themselves. 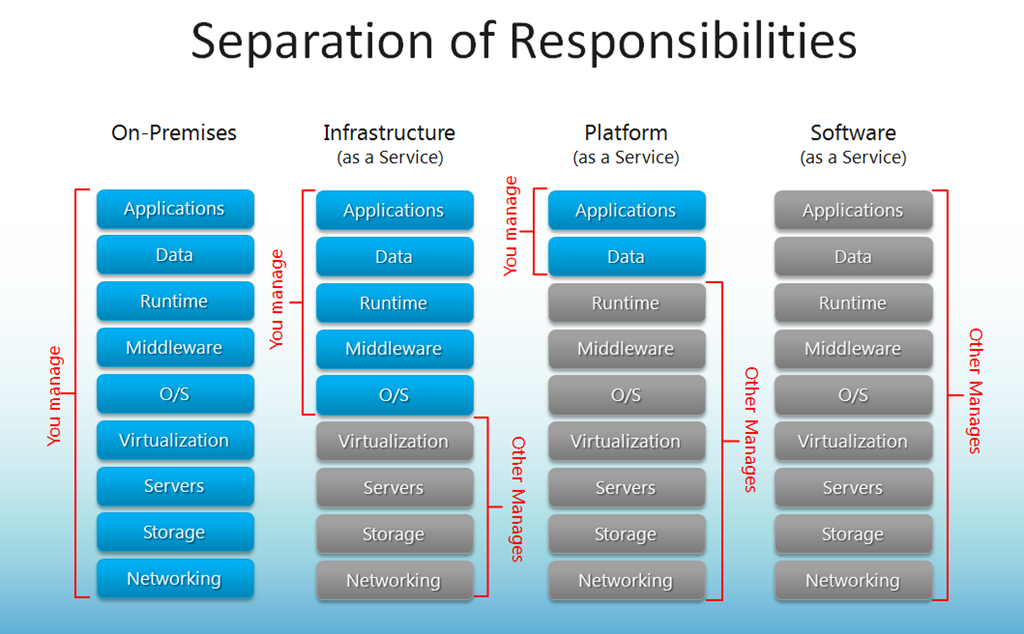 Industry standard definition IaaS and the other cloud terms.

PaaS provides a higher level service to users, but with less choice about the underlying platform. CSC's regular HPC service (i.e. Mahti and Puhti) is in some ways PaaS although HPC applications typically use a very wide mixture of interfaces, non-standard API's and command line tools. Mainstream PaaS providers offer a framework which provides a documented common API for all aspects of the service.

In SaaS applications are delivered over the Internet. There are many examples of this in common use including web based email and cloud file storage. An example of SaaS from CSC would be the Chipster analysis software for high-throughput data. Chipster is an easy to use graphical interface that contains over 240 analysis tools for next generation sequencing (NGS), microarray and proteomics data.

A virtual machine is a computer simulated in software that runs as a process on a host machine. It exposes a part of the resources of the underlying machine to a guest operating system. This approach is more flexible compared to using just physical servers, as a single large physical server can be partitioned into isolated smaller virtual machines.

One or more virtual networks can run on the same physical network. This helps prevent users from seeing each others' network traffic in a shared infrastructure. In IaaS services virtual networks are assigned to specific users or groups of users to provide security and ensure fair use of shared network links.